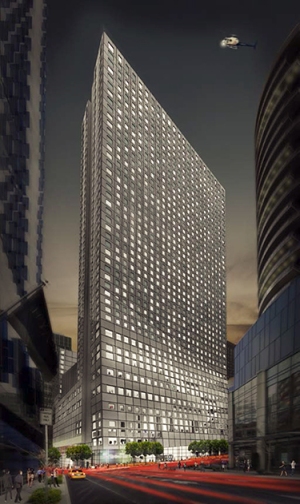 Hotel developer R.C. Hedreen goes before the Seattle Design Commission today. Why? Hedreen needs the city to cede over a public alley in order to build a new mega-hotel at the old greyhound bus site at 9th and Stewart.

To give you a sense of the scale of this project according to the most recent proposal that the tower will reach the highest allowable height in downtown at 500ft tall, include 1,680 hotel rooms, and as much as over 185,000 sq. ft. of convention and pre-function space. The total proposed amount of meeting space is enormous – greater than the combined meeting space in Seattle’s Sheraton, Westin, Hyatt and Hilton hotels.

But the City doesn’t just hand over alleys or streets to anyone who asks. Unlike land use approvals typically granted for checking a series of boxes, City Council has complete discretion to say no or yes – for a wide variety of reasons related to public interest.

On top of that discretion, the City is required by State law to obtain public benefits in exchange for the permanent loss to the street grid (called a street or alley “vacation”). For an alley vacation on the newly approved Amazon campus, Jeff Bezos is on the hook for purchase and operation of a street car among other open space and transportation goodies for the neighborhood.

So, what’s the mega-hotel offering as public benefit?

Before answering that, we have to note that the developer, R.C. Hedreen, needs over 880,000 square feet of “bonus” floor area to build all 400 feet of his hotel tower. To get the bonus, the City’s incentive zoning program requires the developer to produce about 150 affordable units on site – or cut a check to the Office of Housing for $12.4 million. Hedreen has proposed to build the units on-site. And he wants to count it as a public benefit for the alley.

According to the developer, building on-site is “unprecedented” and a “high priority for City leadership.” Both are true. No commercial project of this scale has included units on-site and City Council and the Mayor are working now on getting incentive zoning to generate more affordable units in downtown. But everyone recognizes that commercial developers don’t build on-site because the in-lieu fee option is typically much cheaper.

So, does Hedreen get to count his affordable unit for both the bonus area and the alley vacation? The City’s Street Vacation policy (City Council Resolution 30702) says no. It specifically states that “Meeting code requirement for a development” does not constitute a public benefit. And that “The public benefit must exceed elements required by the SMC.” Building on-site may be more expensive, but it does not go beyond what the code requires Hedreen to get a density bonus.

It seems that this developer wants to “double dip” from the public well with his on-site units. It would be reasonable to argue that additional incentive is needed to get more affordable units downtown. But it should be decided through policy, not a street vacation process. For now, double-dipping could undermine both the carefully crafted street vacation policy and the City’s incentive zoning programs. Council created them for separate purposes and for differing public interests: the first, to preserve and enhance the urban environment, and the second to address the lack of affordable housing in Seattle.