2014 looks to be an incredible year to be a big shot developer. The Daily Journal of Commerce reports that, “investors are paying premiums to enter core Seattle neighborhoods, while still achieving yields that are better than the San Francisco, Los Angeles and Vancouver, B.C., markets”.  In neighborhoods like Capitol Hill and Eastlake rents have increased by 9.3% in just 12 months. [i] 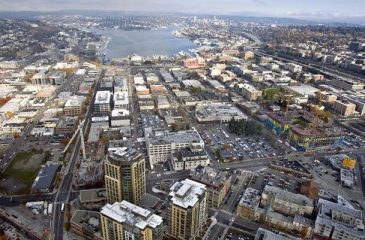 Photo courtesy of The Seattle Times

But despite big returns and a sunny horizon, downtown developers [ii] have attempted to rig the system for their own advantage by suing the City over a marginal fee increase that provides money for affordable housing.  Not only does the lawsuit seem absurd given current market conditions, the developers never publically raised their concerns and instead went straight to a lawsuit. Advocates, affordable housing developers, community members and elected officials and many developers have been working hard together to find solutions to the overwhelming need for more affordable housing.  We all want to believe that we have the same goal of building a strong city where everyone can thrive, but this lawsuit signals developers’ main interest: their profits.

Additionally, the lawsuit appears to be an escalation of developers’ scare tactics.  For years developers have been able to operate incredibly profitably while limiting their public responsibility, threatening to sue if City Council asks them to step up their contribution to affordable housing.  Now in 2014, as City Council commits to strengthening its incentive zoning programs, developers sue over a meager fee increase that Vulcan Inc. lobbied for during the South Lake Union rezone.

The pressure on Seattle families and workers to find affordable housing within City limits is growing.   Taxpayers have done their part, and stepped up to the plate through the Housing Levy and MFTE (a program that gives developers a tax exemption in exchange for affordable housing).  It’s time that local developers in Seattle do the same.

[ii] The complaint appears to be brought in part by Clise Properties, Inc and  Second & Pike LLC owned by Seattle developer Greg Smith who is also the founder and principal of Urban Visions