There is no question that the success of SeaTac’s Prop. 1 is a win for workers.  But it is also a win for Transit Oriented Development (TOD) and our region’s environmental goals.  Here is why: the $15 Airport Living Wage means more families will be able to live in their communities of choice.

Recently, the Puget Sound Equity Summit brought together communities across the region to explore strategies that ensure TOD will benefit low-income communities and communities of color.  Yet, when it comes to ensuring TOD is equitable the public discussion of policy solutions rarely goes beyond affordable housing. 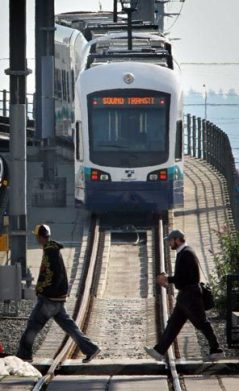 Housing is only one side of the equation.  Living wage jobs are the other side.

Sound Transit light rail should be a regional connector to opportunity.  With soon-to-be three stations in SeaTac, the new living wage law is a big move in that direction.  Low-income communities all along the light rail corridor currently face gentrification and other factors that economically destabilize communities (see our report, TOD that’s Healthy, Green and Just). A $15 an hour living wage at the end of the light rail will allow low-wage workers to prosper in in place.

How? Let’s use Rainier Valley as an example.   An estimated 650 people who live in Seattle’s Rainier Valley work in the city of SeaTac.[1]   With airport, hotel and ground transportation jobs making up the vast majority of employment in this small city, hundreds of Valley residents will likely benefit from Prop. 1 (see who is covered, here). Previous to Prop. 1, many of these residents not only made near-poverty wages, few had seen their wage increase over the last five years.

At the same time their wages remained low, the cost of living rose in their neighborhoods, which threatened low-wage airport workers with displacement.  The economic pressure between higher costs and stagnant income causes many families to relocate further outside of the city where the cost of living is cheaper, and where they are also more likely to need a car to drive to work.  A $15 living wage dramatically changes their odds of being able to stay in their neighborhood of choice.

More money in the pockets of these Rainier Valley families will mean their family earnings will grow with the neighborhood.  Instead of new community investments resulting in insurmountable rent increases, workers making a living wage will be more able to take cost of living increases in stride and benefit from the new infrastructure in their neighborhood.

Earning wages that families can actually live on, more people will be able to live in their communities of choice, close to transit and opportunity.   It also means fewer car trips for these residents, better environmental outcomes and a big overall win TOD near light rail. 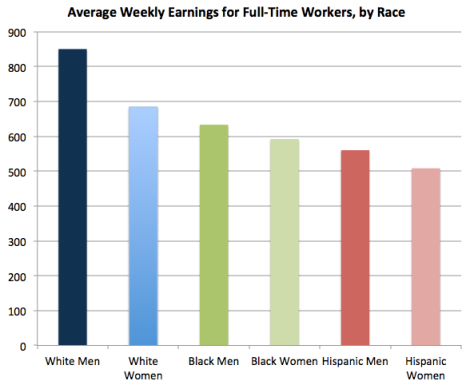 The Atlantic, “The Workforce Is Even More Divided by Race Than You Think”

By Nicole Vallestero-Keenan and Coco Chandi

How much you make is tied to race and gender. According to findings posted last week in The Atlantic, labor statistics show that the US workforce is stratified by race and gender. This is no newsflash to women and people of color, but the statistics below should be at the center of Seattle’s living wage debate.

Why the disparity shown in the graph? It’s partly a function of who works in what sector of the economy. Using data from the Bureau of Labor Statistics, the article shows that your race has a significant influence on the kind of job you have. Blacks, who make up 11% of the workforce, represent 33% of home health aides and 25% of security guards and drivers. Latinos, who account for 15% of the workforce, represent 44% of grounds maintenance workers and 43% maids and housecleaners. Asians account for only 5% of the workforce, but represent 60% of personal appearance workers (nail salons, hairdressers, etc).

The bottom line: job sectors heavily represented by people of color and women pay lower wages. However, in SeaTac voters recently approved an industry specific living wage of $15 an hour and the measure itself shows a path forward to addressing inequity across industries.

SeaTac’s Proposition 1 covers jobs that are disproportionately held by people of color: security guards, janitors, service workers, cabin cleaners and housecleaners at hotels. When implemented, the living wage will provide a $15 dollar wage floor, paid sick leave, and job security for over 6,000 workers in the City of SeaTac .

Not only will workers in these industries earn living wages, but the measure will also boost local economic activity, bring more business to local (many people of color-owned) businesses, and create more jobs in the region. Living wage requirements don’t just help tackle income inequality, they are a powerful tool to address race and gender pay gaps.

Last week a proposal to up-zone building heights near Mt. Baker Station ignited controversy when it made a last minute appearance on the agenda for the council’s Planning, Land Use and Sustainability Committee just before the holiday.

Opponents accused the city of attempting to suddenly ram the proposal through without due community process, and claimed the up-zone would increase crime in North Rainier. 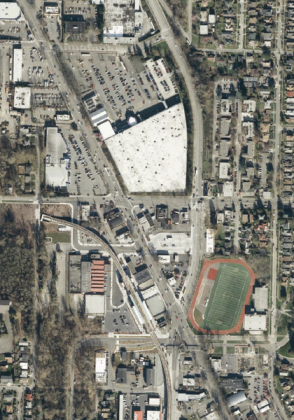 Photo: Department Of Planning And Development

However, Community representatives are not uniformly against the proposal. Puget Sound Sage is a founding partner of Seattle’s South Communities Organizing for Racial/Regional Equity (CORE) which submitted comments to DPD over the summer supporting the proposed up-zone, and advocating for increased investment beyond zoning to street and safety improvements.

The South CORE alliance represents multiracial and ethnic communities rooted in South Seattle and South King County who believe that in order for transit oriented development to result in racial justice, social equity must be at the center of all planning decisions.

While the delayed timeline was not South CORE’s aim, they will use the time to encourage City Council to improve transit service, accessibility and safety and access to good jobs around the station area.

The testimony submitted in August maintained that:

“Overall, we believe the proposed zoning changes fit with the long-term vision for the North Rainier/Mt. Baker area. We are encouraged by the City’s decision to use the Seattle mixed zone to retain light industrial businesses in Southeast Seattle, such as the Pepsi-Cola Bottling Company.  Maintaining and growing living wage jobs close to transit and urban areas is critical to ensuring communities of color and working families can afford to live in transit rich neighborhoods and benefit from new investment.

Passing this rezone is only the first step to building an equitable transit-oriented neighborhood. While the proposed rezone sets the boundaries for how North Rainier/Mount Baker will develop, the North Rainier/Mt. Baker area needs a significant amount of investment beyond zoning before our City’s vision for a thriving, and diverse community can be realized.”

Just last week the final tally came in on SeaTac’s proposition 1.  The “ayes” have it.

So the sky must be falling, right?  Afterall, opponents of the biggest campaign the City of SeaTac has ever seen have been claiming for months that businesses would close shop, employees would lose their jobs, and airlines would move their business away from SeaTac.

Wrong. Despite these claims, business appears to be booming at SeaTac airport. 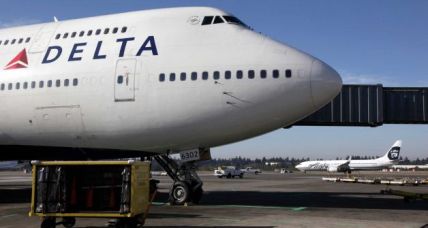 Rather than moving business away from SeaTac, some are making new investments.  In fact, Delta Airlines is making moves to expand business at SeaTac airport.  On election day, with a pending victory for living wages at SeaTac Airport, Delta Airlines announced, their plans to expand the Seattle market by adding 8 new daily non-stop flights, and a summer seasonal flight to Alaska. Demonstrating that with living wages, SeaTac Airport will grow as an international hub.

Are we seeing businesses close inside the airport?  Well, it looks like the opposite is happening for concessionaires inside the airport.  Just last week, the Port of Seattle announced that they are opening 4 new duty free stores, which plan to hire roughly 85 new employees.

Currently, Proposition 1 will cover roughly 6300 workers, but it looks like with these new shops and expanded flights, there will be even more living wage jobs at SeaTac Airport.